For artist Tom Sachs, there is the right way, the wrong way, and his way. Sachs specializes in rough-hewn recreations of everything from enviable luxury objects to iconic technological achievements and automatic weapons which revel in proletarian materiality.

His objects are assemblages of duct tape, plywood, foam core, Tyvek wrap, Sharpie labeling in Sach’s handwriting, Benjamin Moore white and OK Hardware store stickers. You can practically smell the sawdust on the floor. There’s no artist working today that’s as interested in how things are made as Tom Sachs.

“The best made thing of all time is the iPhone,” he tells me from his New York studio. “It’s been 500 or 5,000 or 50,000 years of craft leading up to this object, 5,000 years of craft where craftsmen have worked tirelessly to erase the evidence of their own hand. Finally we’ve achieved it. There’s zero evidence that it’s handmade, and I’m sure that a lot of it is really handmade or hand-fitted. We’ve lost the identity in the culture.”

The New York sculptor practices bricolage, a French term for the art of repairing or cobbling something together with what’s at hand—a do-it-yourself ethic. Big picture, Sachs, rendering handmade versions of recognizable objects, is a pop artist in the American tradition, reflecting our culture back at us. 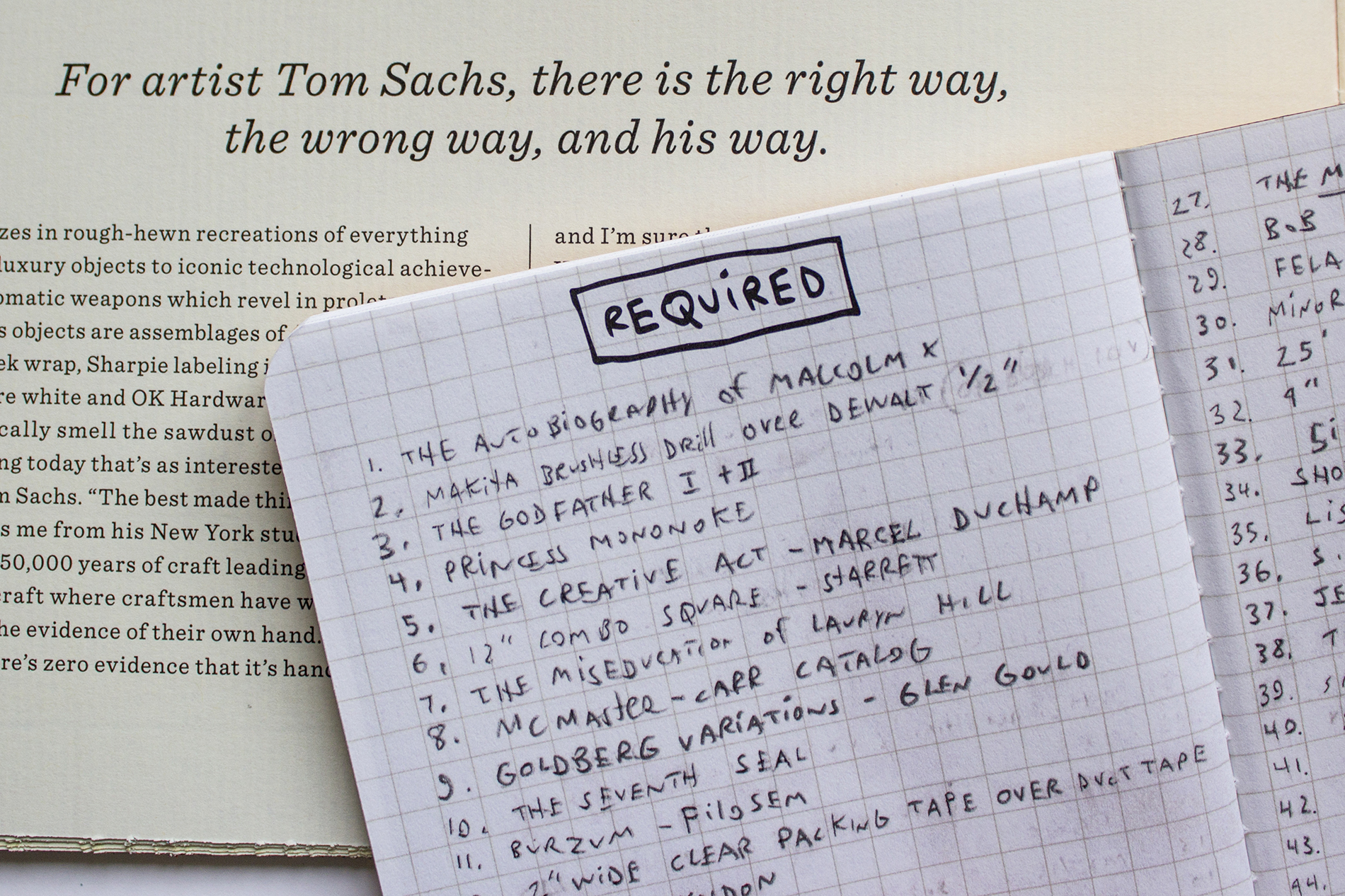 Obsessive about process, he’s taken the day-to-day culture that he fosters in his SoHo workshop and turned it into public mantras for how his team works—how anyone should make. He’s made short films about it—cheeky riffs on instructional videos. Don’t fret, however, that Sachs has demystified his art to the point of banal technicality. Sachs’s faith in the conceptual underpinnings of his work, the idea that the maker can transform one thing into another and elicit a powerful reaction, is made even stronger, more beguiling by showing us the who, what, where and how in detail. “When you see an OK Hardware sticker on something [of mine], its rooting the object in Soho New York. It’s still got a phone number with 212 on it. It’s got a street address of Broome Street. It communicates where this thing is from. It’s like ‘Made in USSR.’”

Raised in Connecticut, Sachs says his upbringing in a hyper-competitive, brand-conscious environment resulted in his producing a ceramic Nikon camera for his dad while a grade schooler. A mediocre high school student, he threw himself into skateboarding, studied at Bennington and in London, before working in the furniture studios of both Frank Gehry and Tom Dixon. Dixon taught Sachs to use “salvage” materials like Victorian railings, while in Gehry’s studio, he learned focus—basically sanding hunks of maple for a year. It was working for Knoll in Santa Monica that he made his breakthrough.

“I had this job making architectural models and making models for special effects for TV and commercials. I learned that I had quickly gained the ability to make anything I could think of. With a little bit of technique, you could make anything. Prior to that, I had been making sculptures like David Smith, Barnett Newman or Donald Judd, reduced objects, and sculptures that were expressive of the declining industrial empire of the northeastern industrial corridor. After this realization, I synthesized the idea of making things with the idea of making things with a process. With a process was the priority: welding, carpentry, ceramics.” 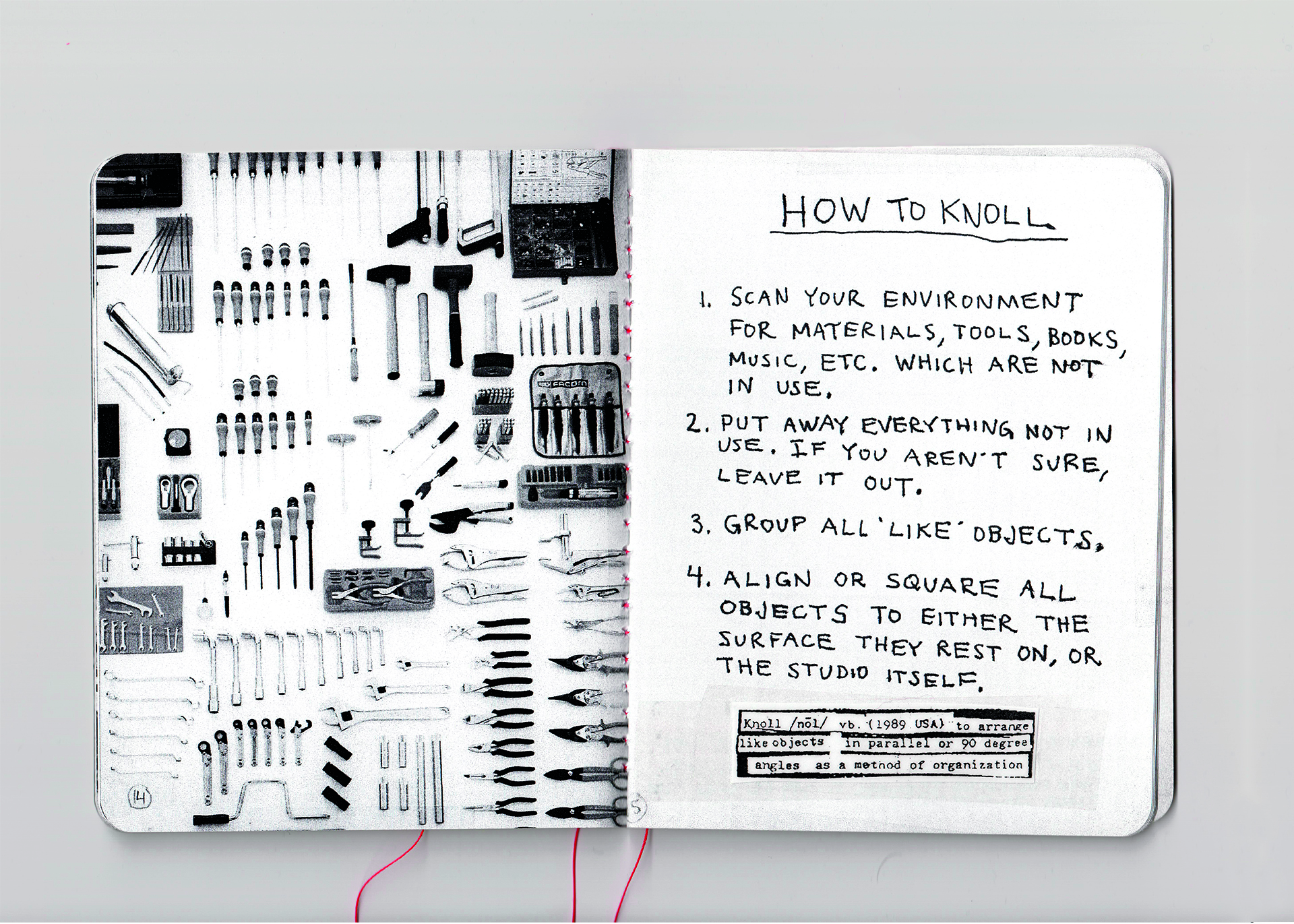 In 1994, in New York, he broke out with Hello Kitty Nativity, a Barney’s store window display that featured Bart Simpson as the three wise men and Madonna as the Virgin Mary all made from colored duct tape. It made a ruckus. A bad boy reputation that was further cemented when a Sachs show in 1999 at Mary Boone’s gallery allowed visitors to take home live ammunition as a souvenir—the gallery owner spent a night in lock-up.

In Sachs’ sculpture, weapons are likened to status symbols—He’s fabricated a Hermès hand grenade, a Tiffany Glock and a Chanel guillotine. But he’s no enfant terrible, exactly, nor didactic purist. He sees himself as participant in this culture he’s commenting on. And his penchant for faux branded works has led to official collaborations with the likes of Nike (on the NIKECraft Mars Yard Shoe) and Prada who offered him shoe boxes after his Prada Death Camp created a miniature concentration camp from a Prada hat box in 1998. 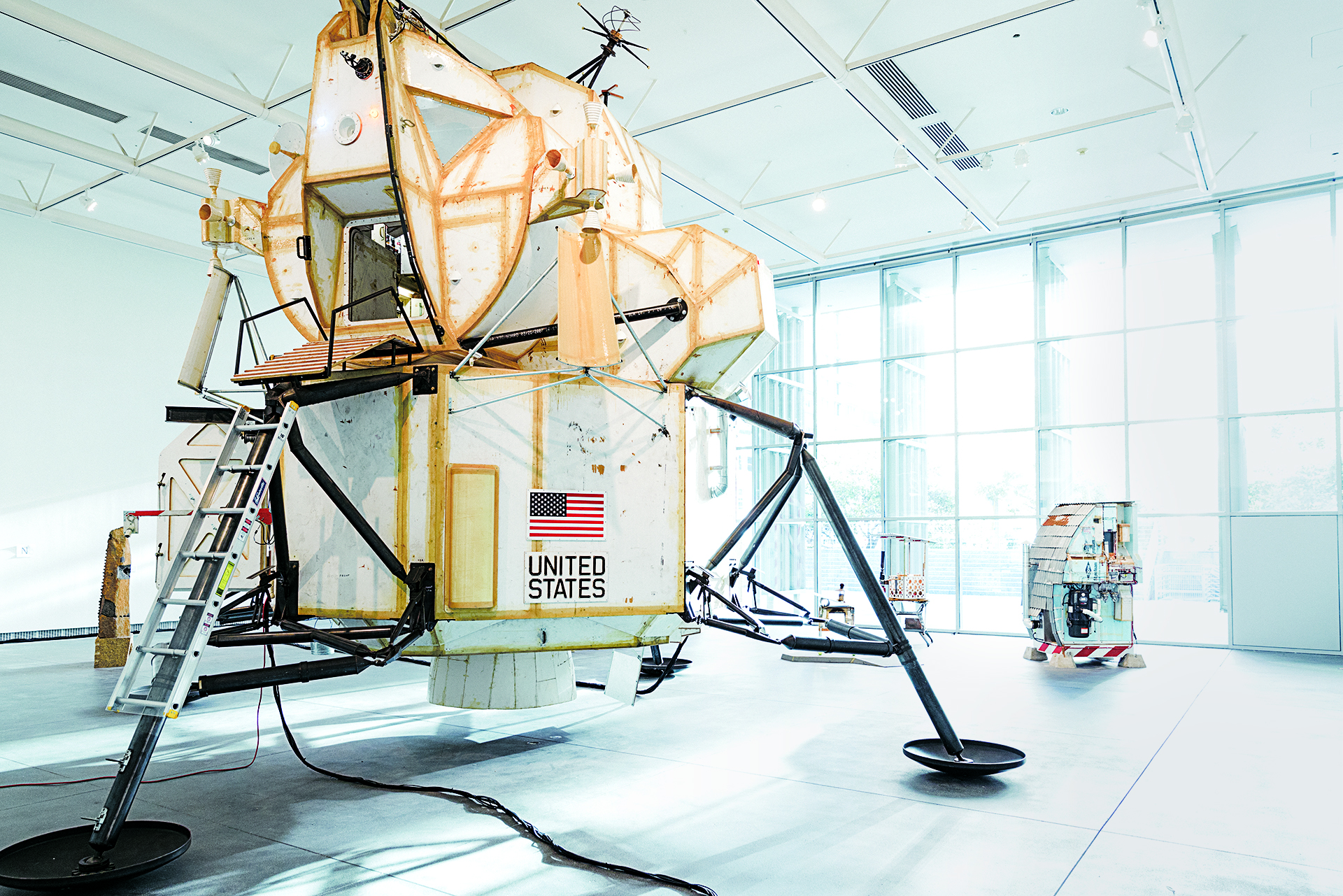 Contemporary art is rarely as fun or as accessible as Space Program, Sachs’ long-running series exploring NASA missions, real (the moon) and imagined (Mars). Beginning with recreations of various lunar landers in hardware store materials, Sachs’ moon mission culminated in a 2007 Space Program show at the Gagosian Gallery in Beverly Hills which featured a 1:1 recreation of the lunar module, a functional mission control unit, handmade Tyvek spacesuits plus extras like a booze cabinet, a soundtrack for survival and guns. He followed it up with an even more expansive Space Program: Mars installation at the Park Avenue Armory in 2012 featuring a go-kart Mars rover, a Mobile Quarantine Vehicle RV, Darth Vader, a tea house and real-time mission performances on the red planet’s surface. Sachs enlisted help from the real-deal Jet Propulsion Lab, Nike and Prada on the project.

Sachs feels a kinship with NASA’s bespoke production methods.“The NASA stuff is incredibly handmade, it is really bricolage. What we’re trying to do with the space program is push the available limits. If we had more resources, we would be going to Europa or Alpha Centauri, we’d be going to other planets. Really the whole space program from Apollo continuing to now has pushed the economic limits. We’ve always had ideas that exceed our abilities to execute them. 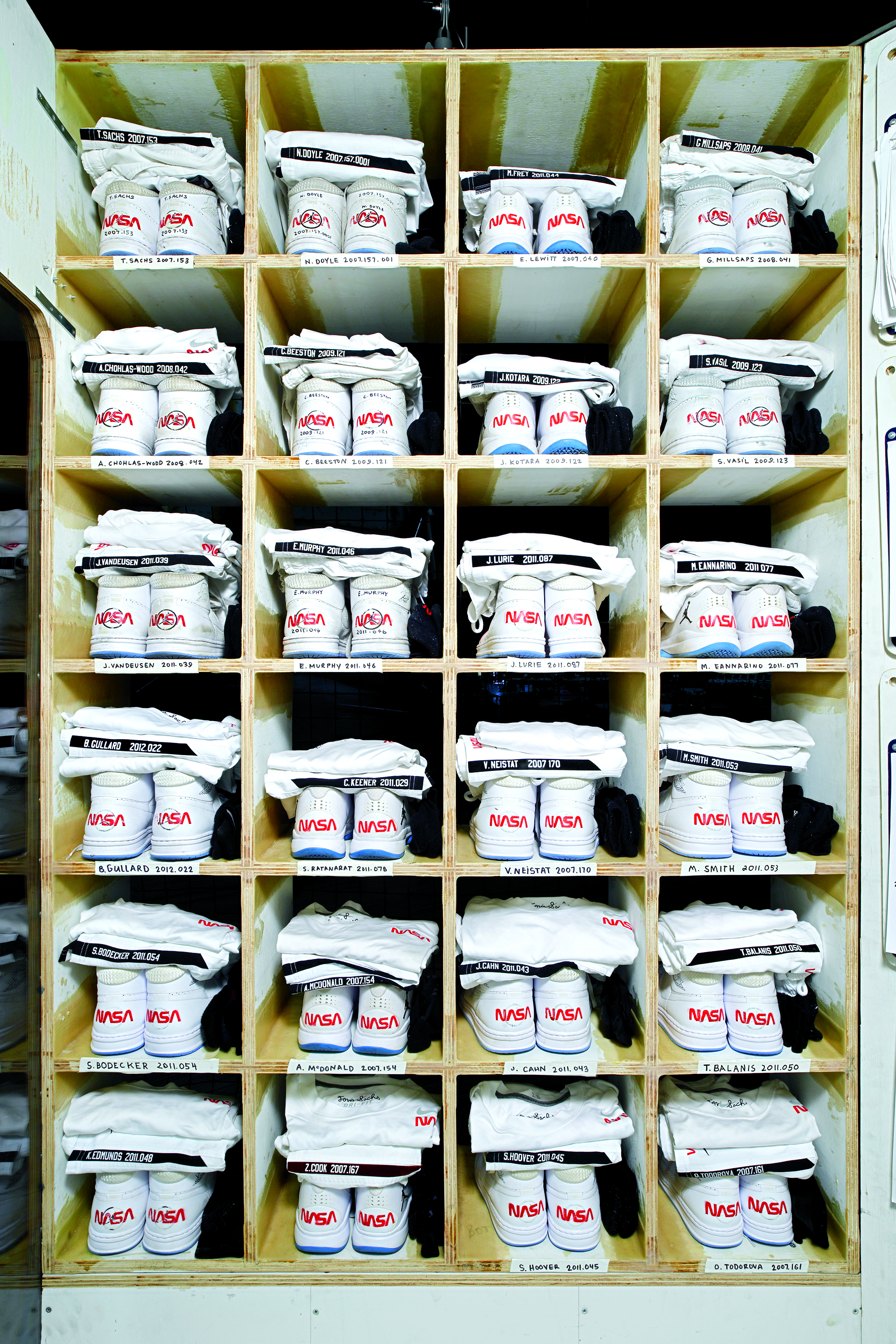 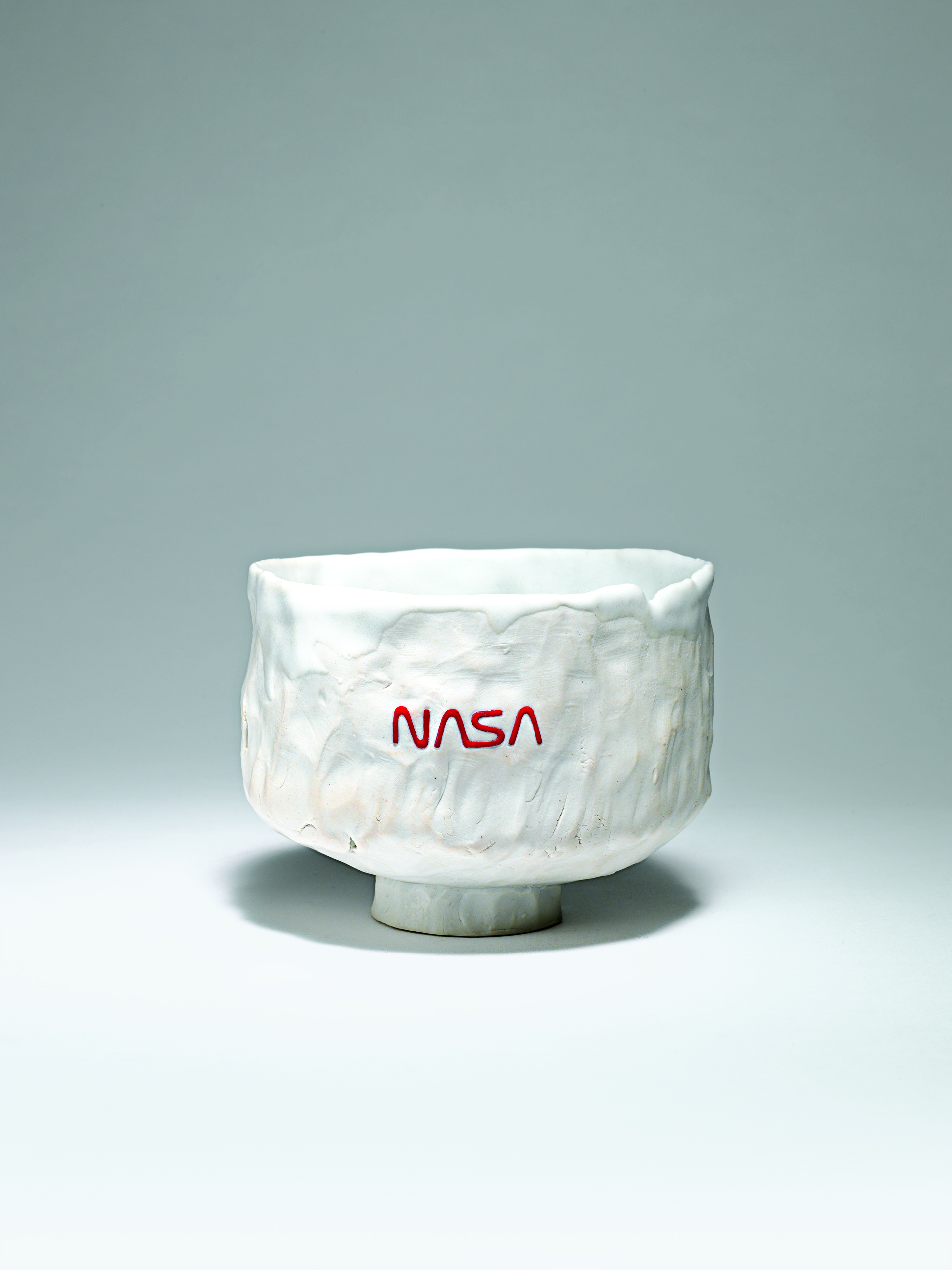 Nasa Tea Bowl
Tom Sachs
“My Space Program is no different, we have got different agendas and we’re always trying to push the limits of what we have available. I’m not trying to be cute… I know some of it is funny. I’m not constrained by having to meet the demands of the scientific community or the tax paying public. I just have to do my Space Program to meet its own needs. There’s a lot more flexibility. I think that allows us to be a bit more human and bring more contradictory elements into our program. That’s why we can have a tea garden on Mars.”
Tom Sachs 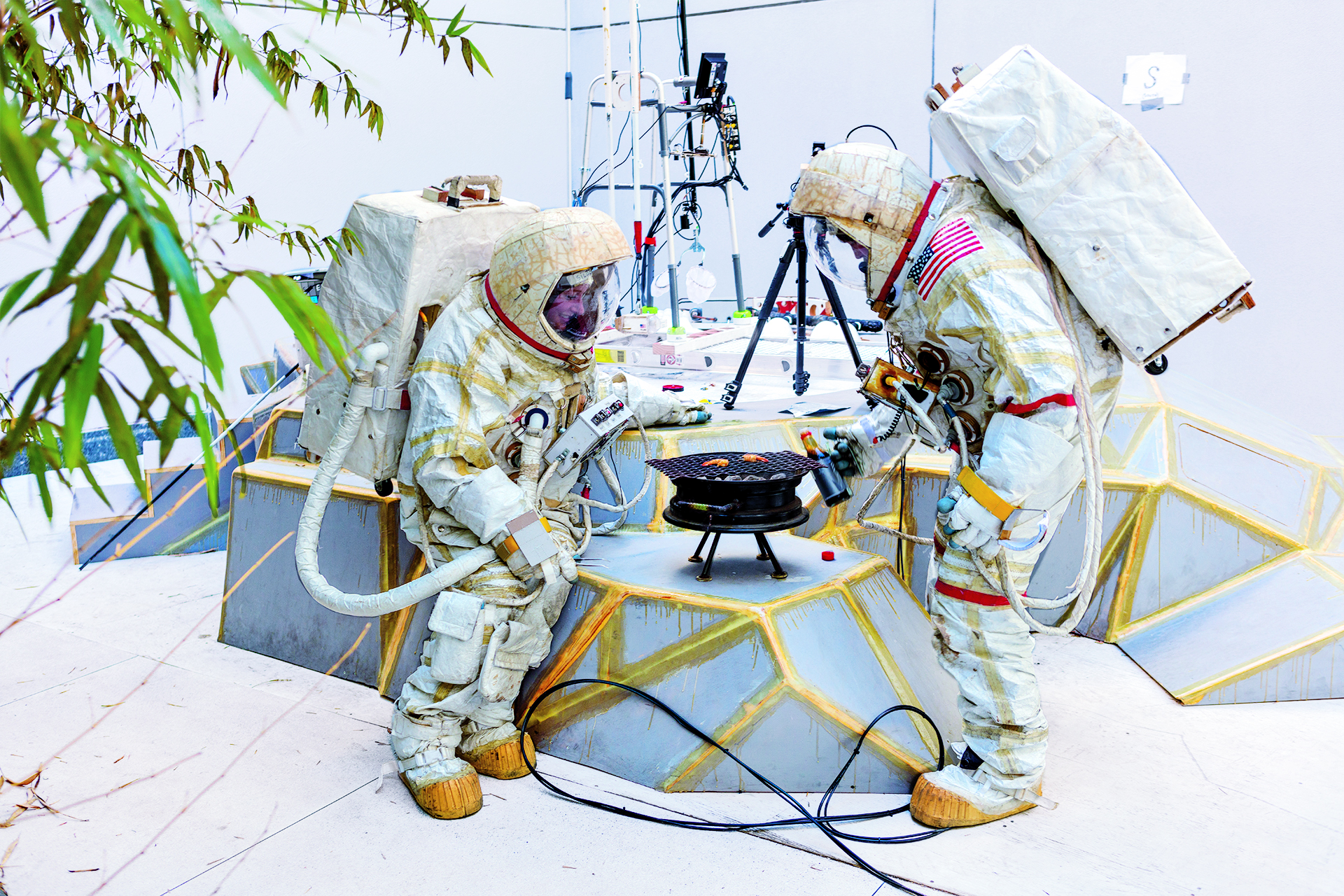 In playing with space and its American-made accouterments, Sachs exhibits a fascination with the ingenuity and bespoke technology of the Apollo missions, the powerful iconography of the NASA logo—while touching on his boyish obsessions, our society’s utopian dreams and collective memory.

It’s on the small screen where Sachs really puts his process on display. Inspired by the Dutch art collective Atelier Van Lieshout and The Manual explaining its practice, Sachs and company produced a series of videos (directed by former assistant turned propagandist Van Neistat) outlining his studio practices, rules and way of working. 2010’s Ten Bullets is a witty instructional video for employees starting at Sachs’ studio as well as studio visitors. The Working to Code series presents the fundamentals of the practice which include rules for maintaining the common areas, prescribed methods for communication, package tracking and mantras such as “creativity is the enemy.”

Creativity, the enemy? It’s no joke. “We always say you must innovate incrementally, always build upon the last work, don’t improvise. I say avoid creativity and keep things as simple as possible. Always.” 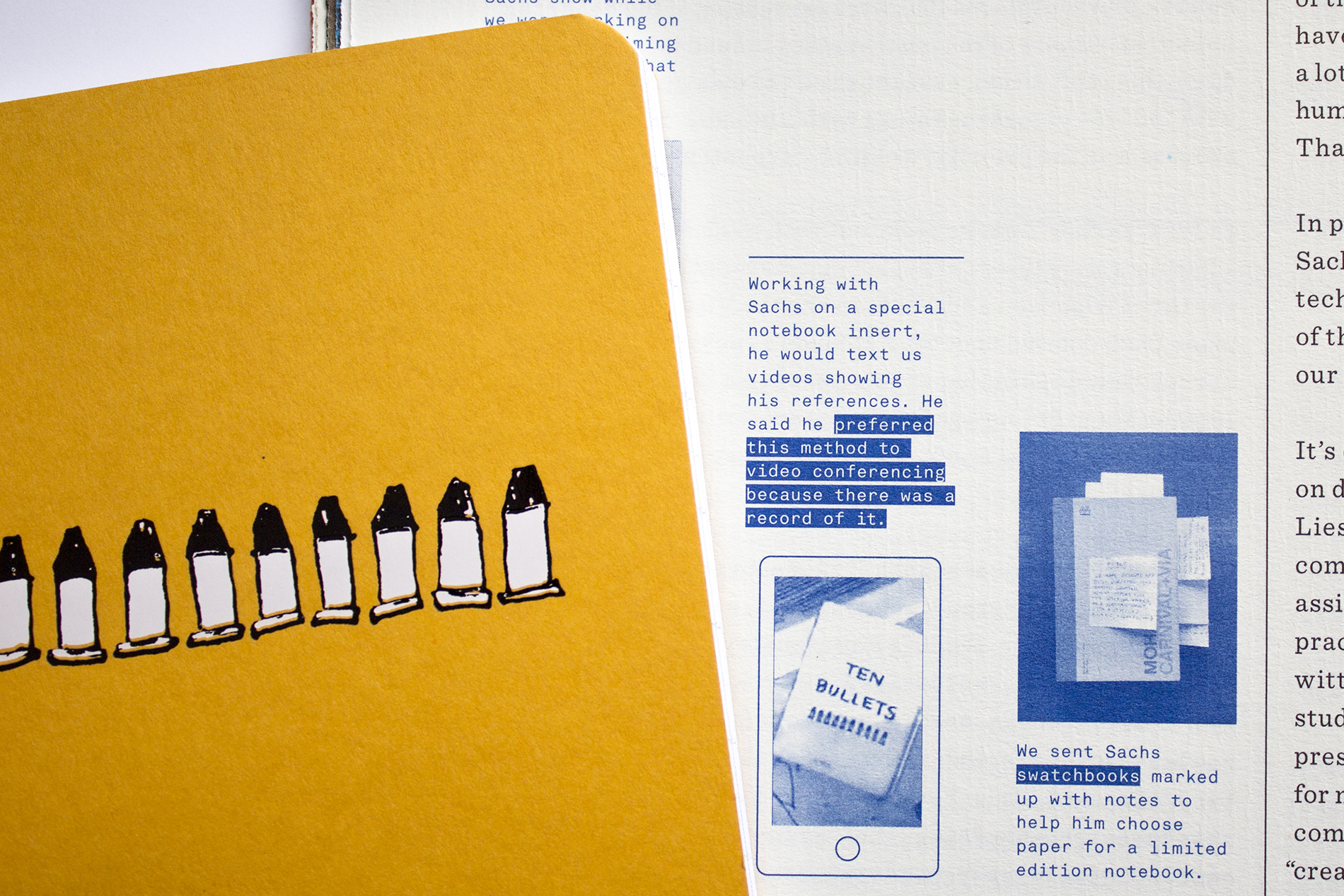 There are no secrets in his “process-oriented conceptual art.” He asks me if I’ve read Sol Lewitt’s Sentences on Conceptual Art, which informs Sachs’ commitment to seeing his ideas through, not fiddling with them on a whim. Sachs explains in interview after interview that he always paints his plywood before cutting it. Why? To highlight the process and show the artist’s fingerprint, giving it an advantage over the sleek, manufactured original.

He learned the hard way just how essential this human quality was to his work with SONY Outsider, a recreation of the Fat Man bomb dropped on Nagasaki, which was judged too slick when unveiled in 1998. Sachs called it a “huge failure” because of its expense but also because critics noted that it looked machine-made. They were right, Sachs had it fabricated.

Sachs picked up another mantra at Knoll: Always Be Knolling. “At the end of the day, we’d take all of our tools and line them up and clean them off with an air compressor. We took all the parts of what we were working on and lined them up at 90-degree parallel lines as a method of organization. It wasn’t truly putting them away. But when you went back on Monday morning, there was a really clear, beautiful and welcoming set of materials and objects to approach. You start your day with generosity toward those materials. They, in turn, welcome you. I was asking one of my coworkers what to call the way you organize things, and he shrugged and looked up at the wall and said ‘Knolling?’”

The discipline that Sachs instills has purpose. Keeping the studio hyper organized makes sense because he hates buying things more than once, gets the best thing the first time and wants it easily accessible. The videos are a painless way of understating his practice. The process, the transparency, the do-it-yourself ethic are indicative of an old-fashioned yankee self-reliance and organization. It’s one part Zen and the Art of Motorcycle Maintenance, one-part Army bootcamp with a dash of L’Ecole des Beaux Arts and a spritz of punk. The Bullets are, to a certain extent, about extending Sachs’ personal signature to everything done in his name, but also about a respect for the simple act of making things.

It helps that Sachs, inspired by the tireless work ethic of James Brown, works seven days and rarely vacations, to his girlfriend’s horror. He views studio maintenance as a sacred charge. As of March, Sachs has a dozen full-time assistants— the studio atmosphere evokes the tight-knit family-like feel of the crew of Steve Zissou’s Belafonte—or a cult. The squad eats red beans and rice every Monday, Louis Armstrong’s recipe. Interns work for three months and if that works out, they take a position. If they’re caught selling a sculpture on eBay, they’re toast.

They even train together. Space Camp is a tongue-in-cheek video demo of the studio team’s morning workout routine “the five” which includes a push-up, a dead-lift, a sit-up, a chin-up and a lunge, all to “strengthen the core.” Each Space Camp session ends with “a meal, hot shower and helicopter rescue simulation,” the latter of which is really a vintage toy game. Sachs maintains that the regime is real and purposeful. “The goal of Space Camp is fitness, preventative medicine. We forge our bodies in the furnace of our souls.”

This article was originally published in Issue 11 of the Mohawk Maker Quarterly. The Mohawk Maker Quarterly is a vehicle to support a community of like-minded makers. Content focuses on stories of small manufacturers, artisans, printers, designers, and artists who are making their way in the midst of the digital revolution. Learn more about the quarterly here. 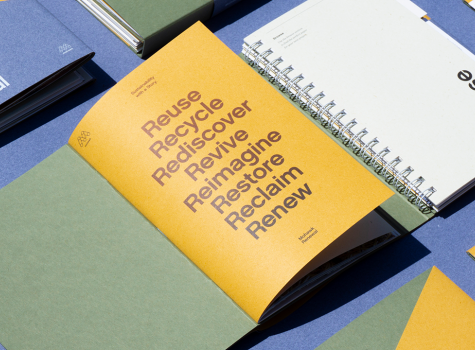 The Mohawk Renewal Swatchbook is Here

The moment you pick up a Mohawk Renewal swatchbook, the story begins to unfold. 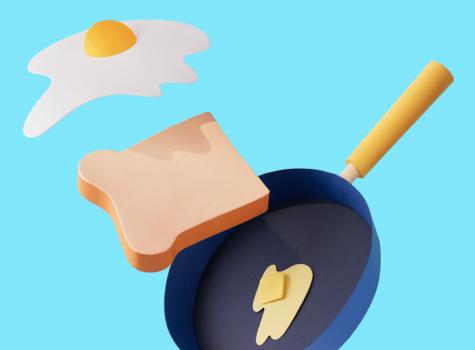 Reina Takahashi is a magician with a sheet of paper. Takahashi, a self-proclaimed Paper Artist, spends her days working with brands of all sizes who need help expressing complicated or tired concepts in a bright, colorful way. 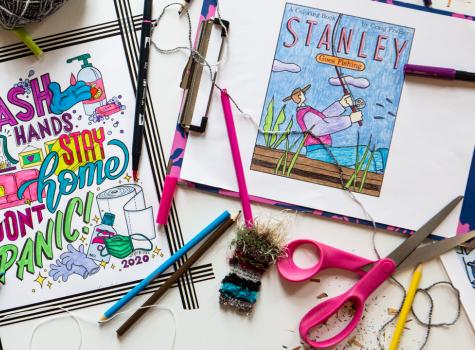 A growing list of inspiring resources made by creatives who are reimagining what it means to really "share" while social distancing.